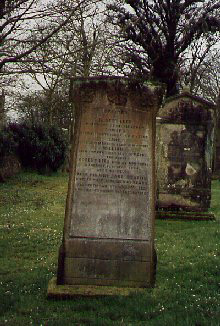 Erected by Robert LEES in memory of his children

On Wednesday afternoon last Robert Lees, 50 (sic) years of age, and residing at Mid Torrs, Old Luce, met with an accident by scalding at Dunragit Creamery where he was employed as pigfeeder.

It seems that in the course of his vocation he had lifted the lid off a boiler, and, on returning to the housein which the boiler was situated, he found it full of steam. While taking measures to shut off the steam he unthinkingly stepped back into a boiler, which contained boiling water to the depth of about three feet, and was severely scalded. He was conveyed home, and medical aid was summoned.
WIGTOWN FREE PRESS 20-12-1894

THE SCALDING ACCIDENT AT DUNRAGIT - FATAL TERMINATION. - Robert Lees, who met with the serious scalding accident a fortnight ago at Dunragit Creamery where he was employed, died at his residence at Mid Torrs on Sunday evening at 10.30 o'clock. Deceased was fifty years of age, and leaves a widow and family.
WIGTOWN FREE PRESS 27-12-1894